Art as Infrastructure for Coastal Resilience and Education

This Saturday, June 18th, a group of designers and scientists will be installing sculptural forms in the intertidal zone at India Point Park. The forms were developed by a group of students, faculty and scientists with NSF EPSCoR funding with the goal of improving sustainability of local shellfish populations and protecting coastal habitat from he impacts of sea level rise. The community is encouraged to come by to find out more about the project and participate in the installation.

If you are interested in helping with assembling the forms, moving them into the water, and documenting the process, meet at the cove in India Point Park at 9 a.m. on Saturday the 18th. Look for the red tent and a group of people in RISD shirts. The cove is located off of India Street to the west of the Park's parking area—look for the red tent. If you plan to participate please bring a sun hat and closed-toe shoes.

Over the past three years a team of landscape architects and sculptors from Rhode Island School of Design have been collaborating with scientists from the University of Rhode Island, Roger William University and Rhode Island College to integrate art and science for a coastal restoration project at an urban waterfront site in Providence, RI. The team developed 3 pilot spherical sculptural forms to be installed in the intertidal zone that are designed to improve the resilience of coastal habitats to the impact of global climate change.

Coastal ecosystems in Rhode Island, and around the world, are experiencing the impacts of increased storms and sea level rise, both of which are predicted to increase in future years. One strategy to improve the resilience of coastal ecosystems is the creation of constructed reefs colonized with bivalve filter feeders such as mussels and oysters. The constructed reefs help stabilize the coastline, provide habitat for marine species, and establish conditions conducive to the reestablishment of salt marsh vegetation. In addition, the bivalve filter feeders that settle on the reefs have the ability to filter large amounts of water, thereby improving water quality.

Building on previous research on constructed reefs, the Rhode Island team of scientists and artists developed three prototypical forms with a steel structure and concrete tiles that encourage bivalve settlement. The forms can be deployed individually or in aggregations, creating a new model for coastal edges that contribute to the restoration of critical ecological services. Unlike other constructed reefs that are large and require a crane or barge to install, these forms are modular and can be constructed and installed by community groups.

Through presentations at local schools, community involvement in the construction of the forms, ongoing citizen-science to monitor shellfish settlement on the forms, and the high visibility of the forms at an urban waterfront site, this project uses the sculptural forms as a platform for public outreach and education about coastal ecosystems.

This summer the team has funding to implement a three-year flagship installation of the sculptural forms at India Point Park. The park was chosen with the support of Friends of India Point Park both for its public visual access and also for its ecological conditions. During the three-year trial period, nine forms will be tested—three each of the three different prototypes—and will be monitored for shellfish settlement and other ecosystem services. 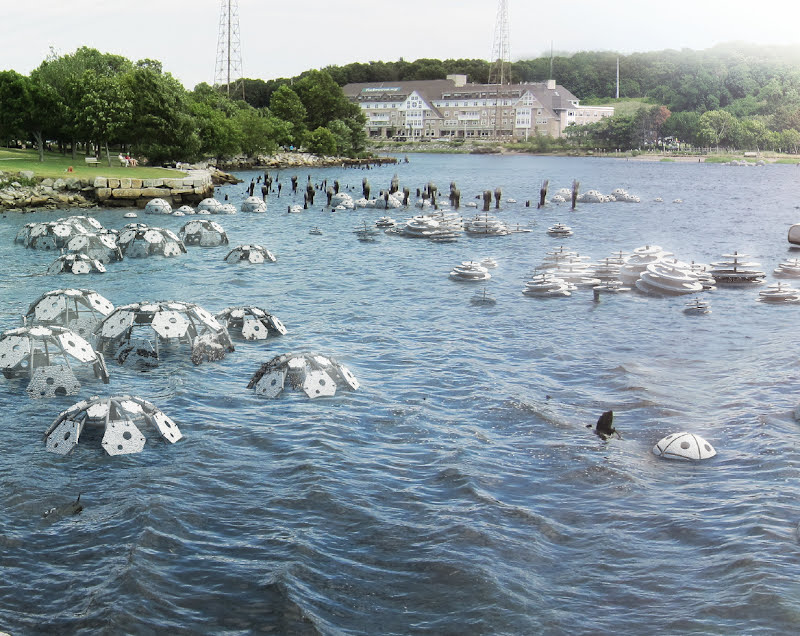